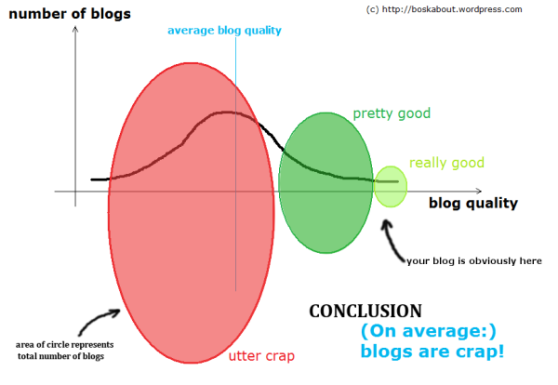 The above infographic is a qualitative representation of the quality of all the blogs floating around. Ofcourse, quality is most of the times subjective and, as such, not measurable. I mean, how would the average person know some “fact” on a blog is just plain wrong? (As a sidenote and point of inspiration (to newspaper websites): I try to prove my facts by linking to my sources.)

Now, one may expect some fuzz if someone trashes the blogosphere for producing crap, for being the landfill of the web. Especially if that someone is a head honcho, like Christian Van Thillo, of some “pretty huge” media “empire”. For some fuzz, go here and here (read it!).

For once, the fuzz is not at TechCrunch (you probably weren’t reading that anyway, coz it’s UTTER CRAP!). But on to the explanation of the above infograph. I set out the quality of blogs vs the amount of blogs of that quality. I assumed a normal distribution because there are a lot of blogs out there (other reasons for choosing a normal distribution are described on the wiki-page). I clustered the quality of the blogs so it proves Van Thillo’s point by taking the integral of three categories (utter crap, pretty good and really good).

Fuzz is easy to create, certainly in this case. Nobody wants to read crap. So you don’t visit crappy blogs, and you certainly don’t have them in your feedreader. Nobody wants to write crappy blogposts, and certainly wouldn’t never ever admit his or her blog is utter crap. So: bloggers and blog-readers automatically assume every blog is pretty or really good. They apply a filter (by ignoring the utter crap). See? Everything is a goddamn filter!

Anyhow, some dude comes along, points to the things nobody saw because of the filters they applied and you end up with fuzz and bloggers’ worlds turned upside down because of it. Traffic. Money. Profit!

Title in Dutch because this isn’t meant to be a really good blog. Really.